Our class had some stickers donated to us;  they were stickers of eyes, ears, noses and mouths that were meant for putting faces on balloons.
I thought that we could use them to alter our faces and make self portraits that have features to represent each of the five senses (which we had been learning about).
The children painted the photocopies of their faces with vegetable dye, and when it was dry they chose stickers for each of the senses to add to their face, and placed them on as they desired. 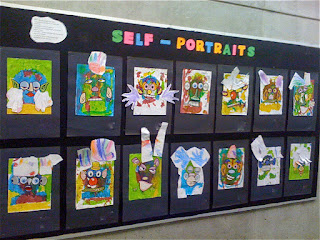 I also had them trace their hands and cut them out
since there was nothing on the faces to represent "touch".
This required a short "how to use scissors" lesson, but they soon mastered the complicated tool.
I love the hands as an addition.  They became beards, hair, moustaches... 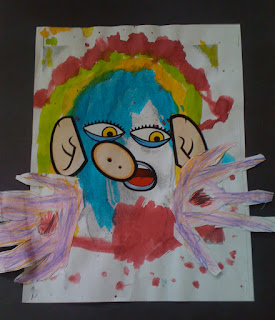 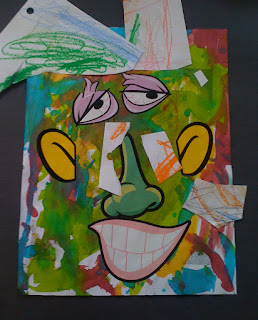 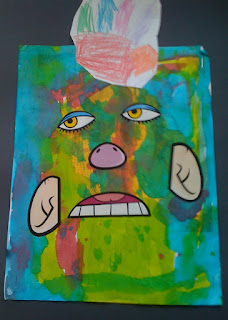 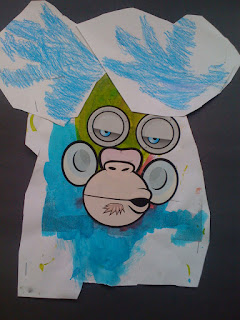 What amazed me was how much the "wacky faces" ended up perfectly illustrating the personality of the child who made it.  Haha! 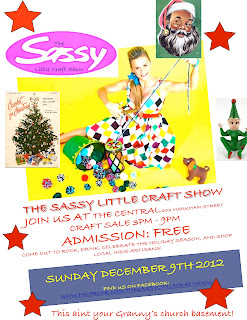 Greetings!
Hope everyone is doing well. As we enter another season of holiday craft shows, we are here to offer you a late afternoon/early night of selling your crafty items at the Sassy LIttle Craft Show. Bring your friends and come enjoy some eats, drinks, and festive holiday tunes. We hope you will join us, and you can be sure we will be decking the halls with seasonal goodies!

Here is the call for entries for the Holiday edition of the Sassy Little Craft Show:

It's a Sassy Little Holiday Show!

Cost is $30 per vendor. Tables are available 2x2ft, each vendor will have approx 3ft, so displays need to be kept small. We suggest items under $50.

If you are interested in a table, send an email, with a short description, web presence and 3 pics to thesassylittlecraftshow@gmail.com

We will have an invite posted shortly.

Take care and we look forward to hearing from you! Please feel free to pass this on to any of your sassy little crafting friends.
Posted by Christa Rowley: Artist, Crafter, Schoolmarm, Domestic Goddess, Vixen at 09:25 No comments:

Every year I take photos of each of my students to use in the class.  We stick photocopies of their faces on their books, cubbies, and folders so that they can recognize themseves and eachother as they are learning to read names.  I also use these photocopies of their photos for various art projects throughout the year.

This year I used our face photocopies to make little art face boards for the kids to play with, based on an idea that I saw on Pinterest.  I backed them on bristol board, and I used some shiny, clear contact paper from the dollar store (it is adhesive on one side like a giant sticker, I believe it is supposed to be for covering books)

When you colour on them with water based markers, you can just wipe them clean. 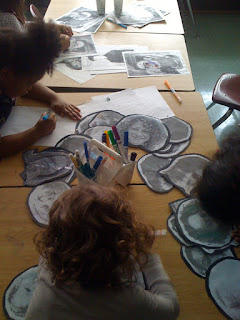 The kids can trace and colour their faces any way they like, adding features or details.  It teaches them about the features and senses of the face, and their accurate placement on the head, but my favourite side effect is that it loosens the rules on portraiture.  We looked at the portrait art of Artists like Otto Dix, Andy Warhol, Frida Kahlo, Audrey Flack, and Pablo Picasso and many others to inspire us.

Then one day I had the idea to use plastiscene on the faces!  They became relief sculptures! 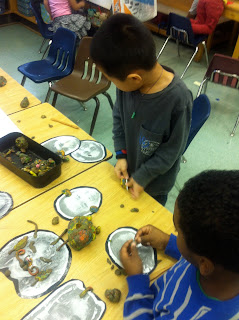 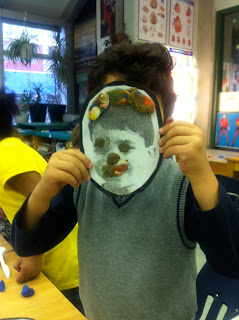 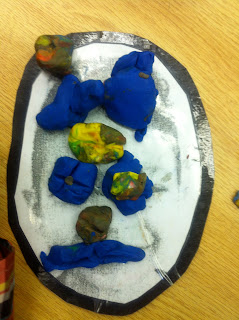 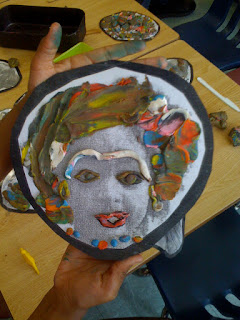 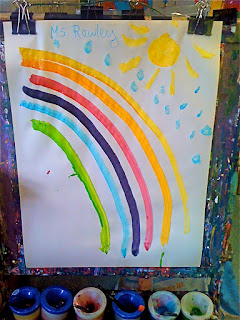 My students burn through paint like there's a never-ending supply, and whatever we do have gets mixed into a sickly everycolourmixedup by the kids who will NOT BE BOXED IN by the tyranny of my one brush for one pot regime.

There are a million DIY fingerpaint recipes out there, so like I do with everthing, I took the good bits from all that I read and made one up.  I put about a quarter cup of flour in a large jar with some hot water and shook it.  Then I added about the same amount of white glue and shook again.  Then I added more water and shook again.  Once I divided it amongst my little containers, I added food colouring and mixed it.  I used concentrated colouring so my colours are vibrant.  Regular grocery store stuff would probably be more pastel.  I'm assuming more flour would make it thicker and more opaque.  Experiment!  What's the worst that can happen?
Anyway, pretty colours, works well, and basically free.